A study with samples from more than 1000 European children analyses for the first time the methylation pattern associated with three genomic inversions and their interaction with the exposome.

A new study led by ISGlobal, a centre supported by the "la Caixa" Foundation, shows that three common genomic inversions in the European population have specific DNA methylation patterns, and that environmental exposures in early life can modify these patterns. These results suggest that carriers of certain genomic inversions may be more susceptible to - or better protected from - some diseases when exposed to certain environmental factors.

Genomic inversions are DNA segments of varying size (from a gene fragment to a large portion of the chromosome) that, as the name suggests, are inverted. That is, they are in the opposite direction to what we would expect. Genomic inversions in some chromosomes are quite common, and have been associated with multiple complex diseases, including obesity. This is most likely because inversions can affect the expression of genes within or adjacent to the inversion. Another factor that regulates whether a gene is over- or under-expressed is methylation (methyl groups added to the DNA molecule), and it is has been proven that environmental factors can influence the methylation pattern of a gene.

"However, until now we did not know whether genomic inversions are associated with different methylation patterns, and whether these patterns are affected by exposure to environmental factors during childhood," explains Juan Ramón González, ISGlobal researcher and coordinator of the study.

In this study, González and his team used blood samples from more than 1000 children aged 6-11 years from the European HELIX cohort (Spain, UK, France, Lithuania, Norway and Greece) to study the methylation patterns associated with three frequent inversions (on chromosomes 8, 16 and 17) in the European population (where they have a frequency of 55.7%, 35.7% and 22%, respectively). Second, they used individual data on 64 early-life environmental exposures to determine whether these exposures had an impact on methylation according to the direction of the inversion.

The results show that all three inversions are significantly associated with differences in methylation, and that this leads to differences in the expression of several genes. "The results were similar with prenatal heart tissue samples, suggesting that the effect of inversions on methylation is maintained between tissues and life stages," says Alejandro Cáceres, co-author of the study. As for interactions with environmental exposures, the research team found significant associations with exposure to metals, diet, phenols and organochlorine pesticides. For example, children carrying the inv8p23.1 inversion on both chromosomes and with higher meat consumption had higher methylation levels in a gene (called TDH) associated with obesity risk in adults. "In fact, all three (the gene, the inversion and meat consumption) have been independently associated with obesity in adults," says Natalia Carreras-Gallo, first author of the study.

"Our results support the notion that genomic inversions, by modifying the genetic context, can change the way environmental exposures affect childhood development. This means that carriers of these inversions may be more susceptible to- or more protected from- disease when exposed to certain environmental factors," she adds. These results pave the way to understanding some complex diseases such as obesity, autoimmune or neurodegenerative diseases. 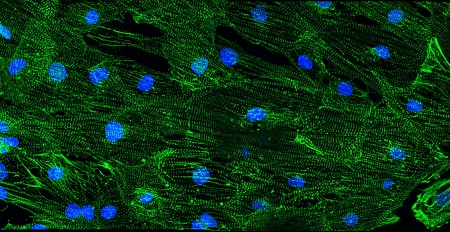 Abnormalities in the proteins responsible for transmitting electrical ...