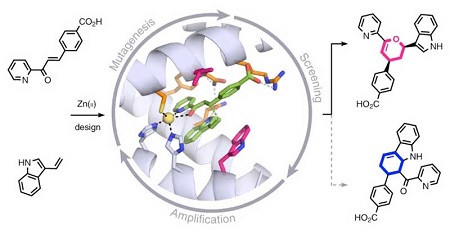 The work, published in the journal Nature Chemistry, describes a zinc-binding protein which accelerates the reaction rate to levels higher than those of natural enzymes.

The research shows, for the first time, that proteins containing transition metals can be designed by computer simulation to catalyse chemical processes previously unknown in nature, with a high degree of efficiency.

(Bilbao, 23 February 2021). Research conducted in CIC bioGUNE - a member of the Basque Research & Technology Alliance BRTA - has designed a protein capable of catalysing, with a high degree of efficiency, a chemical reaction unprecedented in nature. The protein contains a metal (zinc) atom which enables the rate of a chemical reaction to be accelerated beyond the levels achieved by natural enzymes catalysing similar processes. The successful development of this artificial enzyme combined computer simulation techniques and laboratory directed evolution.

"This multidisciplinary research demonstrates, for the first time, that it is possible to use computer simulations to design transition metal-binding proteins to very efficiently catalyse chemical processes unknown in nature. Based on an artificially designed protein structure, several mutations in its active site were computer-predicted that were beneficial for catalysing the desired reaction," explains Gonzalo Jiménez-Osés, Ikerbasque researcher at CIC bioGUNE.

The success of the work, which has been published in the journal Nature Chemistry, lies in the combination of computational modelling with the experimental technique known as directed evolution. Frances H. Arnold was awarded the Nobel Prize in Chemistry in 2018 for her work on this latter technique.

The computational techniques used in this study predict mutants with catalytic activity towards the desired process. This initial activity is absolutely essential to select optimal candidates for the directed evolution experiments in the laboratory, which ultimately give rise to the enzymes displaying extraordinary levels of efficiency.

The work therefore provides an opportunity to expand the available arsenal of biocatalysts for "non-natural" reactions, which are of great interest to the chemical industry. This eliminates the need to start from natural proteins, which are often isolated from exotic organisms or are difficult to obtain and handle on an industrial scale.

Dr. Jiménez-Osés explains further: "The most obvious potential field of application of the concepts derived from this research is in the chemical and pharmaceutical industries. The use of biocatalysts, such as the ones develoved in this work, enables chemical processes to be run in a highly efficient and sustainable way, and makes it possible to use aqueous, non-toxic solvents with total atomic economy (without generating by-products). Purification is very simple and the process ultimately brings about a very significant reduction in both energy and production costs. Our research group has previously worked with world-leading companies (Codexis, Inc., USA) in the developmentof some of these biocatalysts, which have been used for the large-scale synthesis of intermediates needed to obtain the anti-cholesterol and anti-diabetes drugs simvastatin (Zocor®) and sitagliptin (Januvia®), amongst others."

This study, which has run over a period of 10 years from conception to publication, has combined computational simulation techniques based on quantum and Newtonian mechanics, protein expression and purification, and directed evolution experiments. The optimised biocatalysts have been characterised using different techniques (ultraviolet-visible spectroscopy, nuclear magnetic resonance, circular dichroism and X-ray diffraction).

The work has been conducted by the research group of Gonzalo Jiménez-Osés (CIC bioGUNE), in collaboration with the laboratories of Dr. Ken Houk (University of California, Los Angeles) and Dr. Donald Hilvert (ETH Zürich).

The Centre for Cooperative Research in Biosciences (CIC bioGUNE), located in the Bizkaia Technology Park, is a biomedical research organisation conducting cutting-edge research at the interface between structural, molecular and cell biology, with a particular focus on generating knowledge on the molecular bases of disease, for use in the development of new diagnostic methods and advanced therapies. CIC bioGUNE has been accredited as a “Severo Ochoa Centre of Excellence”, the highest level of recognition for centres of excellence in Spain.

Ikerbasque - Basque Foundation for Science- is the result of an initiative by the Department of Education of the Basque Government that aims to reinforce the Basque scientific system through the attraction, recovery and retention of researchers from all around the world. Nowadays, It is a consolidated organization with 290 researchers from from all fields of knowledge.

With the support of the Basque Government, the SPRI Group and the Provincial Councils of the three regional provinces, the alliance seeks to promote collaboration among its centres, to strengthen the conditions to generate and transfer knowledge to companies, contributing to their competitiveness, and to spread Basque scientific and technological capacity.

BRTA has a staff of 3,500 professionals, accounts for 22% of the Basque Country’s R&D investment, generates an annual turnover of over EUR 300 million and files 100 European and international patents per year.