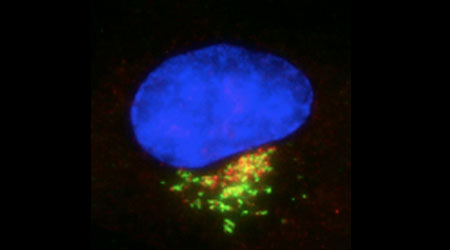 Cohen Syndrome is a rare genetic disorder characterized by multiple health problems. Affected children may suffer from developmental delay, intellectual disability, weak muscle tone, reduction in the number of certain blood cells, which increases the risk of infections, and loss of vision, which becomes worse with age and can lead to blindness.

Yesterday, the Fundació La Marató de TV3 announced the 41 research projects to receive funding from the 2019 La Marató telethon devoted to Rare Diseases. In total, 226 projects have been appraised on the basis of their excellence, methodology and relevance in a peer-review process managed by the Quality and Health Assessment Agency of Catalonia.

One of the funded projects was proposed by Jens Lüders, head of IRB Barcelona’s Microtubule Organization lab, and it involves two additional partners, Dr. Dunja Lukovic (Centro de Investigación Príncipe Felipe, Valencia, Spain) and Prof. Dr. Melanie Philipp (University of Tübingen, Germany). Together, they will use cells donated by patients, and also organoids and zebrafish to elucidate the underlying mechanisms that lead to the health problems in Cohen Syndrome.

The Golgi apparatus and microtubules

“Our search for an explanation of how mutations in the VPS13B gene cause health problems in Cohen Syndrome patients will provide greater knowledge of this rare disease—knowledge that is crucial to find future treatments,” Lüders explains.

Created in 2005 by the Generalitat de Catalunya (Government of Catalonia) and University of Barcelona, IRB Barcelona is a Severo Ochoa Centre of Excellence, a seal that was awarded in 2011. The institute is devoted to conducting research of excellence in biomedicine and to transferring results to clinical practice, thus improving people’s quality of life, while simultaneously promoting the training of outstanding researchers, technology transfer, and public communication of science. Its 27 laboratories and seven core facilities address basic questions in biology and are orientated to diseases such as cancer, metastasis, Alzheimer’s, diabetes, and rare conditions. IRB Barcelona is an international centre that hosts 400 employees and more than 30 nationalities. It is located in the Barcelona Science Park. IRB Barcelona forms part of the Barcelona Institute of Science and Technology (BIST) and the “Xarxa de Centres de Recerca de Catalunya” (CERCA).