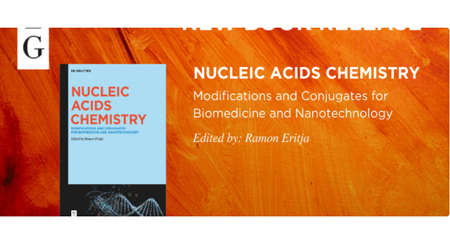 The book “Nucleic Acids Chemistry” takes the most important aspects of the methodology of oligonucleotides synthesis, that is currently expanding by the endorsement of a dozen of new medicines, such as the first medicine based on interfering RNA for the control of LDL and cholesterol in blood that will facilitate the decrease of cardiovascular illnesses. The writing of the book has been directed byDr. Ramon Eritja, member of Centro de Investigación en Red de Nanomedicina (CIBER-BBN) and is Research Professor at Institute of Advanced Chemistry of Catalonia (IQAC-CSIC), being its director between 2012-2017. The co-authors are Carme Fàbrega, Anna Aviñó, Santiago Grijalvo, Andreia F. Jorge, from IQAC-CSIC, Carlos González from Instituto de Química Física Rocasolano (IQFR-CSIC)and Raimundo Gargallo from University de Barcelona The book began to be written in mid-2019, although most of the book was written during the lockdown.

In the last five years, an expansion of technologies based on DNA and RNA in diagnosis and therapeutic use has been produced, and it has been very important in the research of quick solutions to avoid the COVID pandemic and, predictably, the research group’s environment has led the development of several solutions, like biosensors for the direct detection of SARS-CoV-2. A former PhD student of Ramon Güimil group has participated in the development of the BioNTech-Pfizer mRNA vaccine. Another doctor, Brendan Manning, formed in the group has participated in the development of a diagnosis kit named Sherlock, which uses the CRISPR-Caspasa system for the detection of the virus that causes COVID.

Ramon Eritja made his doctoral thesis in the University of Barcelona, directed by Dr. Ernest Giralt, about peptides synthesis. In 1984, he made his first postdoc with Dr. Itakura in the Beckam Research Institute of City of Hope in Los Angeles, where the production of first synthetic genes was carried out, highlighting the production of synthetic insulin that, under the name of humulina, resolved problems caused by the use of pork insulin. In 1986, he made his second postdoc with Dr. Caruthers in the University of Colorado, in Boulder. In this laboratory, the phosphoramidites that are the reactants used nowadays for the synthetic DNA and RNA were developed.

On his return to Barcelona, he joined the Research and Development Center of CSIC, where he organised the first research group focused on oligonucleotides synthesis in our country. In 1984, he moved to the European Molecular Biology Laboratory (EMBL) in Heidelbeg (Germany) to conduct one of the most prestigious groups in DNA and RNA Chemistry in Europe for 5 years. On his return to Barcelona, he took part of the Institute for the Research in Biomedicine in Barcelona (IRB Barcelona) and obtained the recognition of the excellence group of CIBER-BBN. In 2012, he moved to IQAC-CSIC to occupy the institute’s management until 2017.

The book can be bought in this link