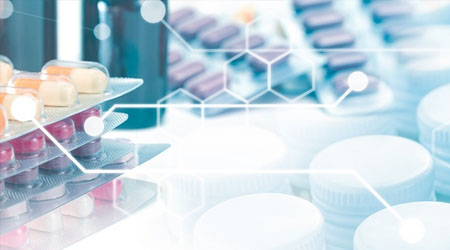 New drug innovation remained strong in 2020. The total of 53 drugs approved represented the second-highest number of approvals in more than two decades, a positive indicator of productivity in the pharmaceutical industry. Structural innovation was a driving force behind many of the small-molecule drugs approved last year by the U.S. Food and Drug Administration (FDA).

The 2020 cohort of new drug approvals included small molecules, antibodies, antibody-drug conjugates, peptides, and oligonucleotides. Of these, cyclic small molecules continue to be the dominant drug modality, accounting for 31 of the new therapeutic drugs (not including diagnostic imaging agents). Of these small-molecule drugs, 65%, or 20 total drugs, were structurally novel, meaning they had at least one new molecular entity (NME) based on a new molecular shape. In this blog we will explore some of these new drugs and the role of their shape on their clinical impact.

The importance of molecular shape

There is a clear connection between structural innovation and the potential of a drug to achieve clinical and commercial success. In fact, structurally novel drugs have been 2.5 times more likely to be designated as breakthrough therapies by the FDA and have been twice as likely to become blockbuster drugs, as compared to other small molecule drugs.

The merit of assessing drug innovation through the lens of their chemical structures was described in our recent paper published in ACS Medicinal Chemistry Letters. Connecting the innovativeness of a drug to its molecular structure makes sense due to the direct relationship between chemical structure and pharmacological activity. The actions of most small-molecule drugs are a function of their ability to bind to specific sites on proteins, sites that are meant for some molecule produced naturally in the human body. A drug may, for instance, bind more strongly than does the natural molecule and thereby prevent that molecule from fulfilling its biological function. Thus, the drug’s ability to bind to the desired site is a function of its molecular structure.

One of the conceptual tools commonly used to analyze the structure of a drug is its scaffold. This is defined as that part of the molecular structure consisting of all its rings along with all the chain segments connecting those rings together. This part of a drug’s structure is significant because it acts to hold in place certain chemical groups that must be positioned in specific ways to interact with the binding site that is the drug’s target. It is not uncommon for drugs having similar pharmacological activity to have the same scaffold. The scaffold can be simplified further by ignoring certain chemical details (i.e., the specific types of elements and bonds) and considering the scaffold as an abstract shape, as shown below.

Despite their simplicity, molecular shapes are often used to compare chemical structures, and they can be used to evaluate drugs in terms of their structural innovation. If a recently approved drug has a shape that was never used in any previously approved drug, we consider it to be structurally novel. Such a drug effectively opens a new region of “chemical space,” and thus we refer to it as a Pioneer drug.

The concepts of scaffold and shape are applicable only to molecules with at least one ring, and most drug molecules satisfy this condition. Among the 33 small-molecule drugs approved in 2020, 31 have at least one ring. Among these, 20 were found to be structurally novel Pioneers based on our new classification scheme.

Structural innovation is often motivated by the desire to improve upon drug characteristics such as efficacy and toxicity that directly impact patient outcomes. This can be seen in three new drugs approved in 2020 to treat rare or “orphan” diseases, which often lack sufficient treatment options due to the small population of patients.

Zepzelca (lurbinectedin), originated by PharmaMar, is a DNA alkylating agent approved for the treatment of metastatic small cell lung cancer. Lurbinectedin’s molecular shape was first reported in 1992 (16 years before lurbinectedin’s investigational new drug application (IND) was submitted to the FDA), and there are currently less than 150 other reported substances that share its shape. Lurbinectedin contains a single ring system, but it is an extremely complex ring system consisting of ten component rings. The part of the structure highlighted in the image is a tricyclic ring system (tryptoline) that is a well-known structural building block in medicinal chemistry. It is found embedded in the ring systems of some natural products as well as the drug Cialis (tadalafil). Tryptoline has been used in the design of lurbinectedin as a replacement for a tetrahydroisoquinoline ring system in a previous drug trabectedin, which was approved by the FDA in 2015 to treat metastatic liposarcoma or leiomyosarcoma. This replacement created a novel ring system not used before in an approved drug. Lurbinectedin’s novel ring system has significantly improved its toxicity profile, potency, and pharmacokinetics relative to trabectedin.

Evrysdi (risdiplam), originated by PTC Therapeutics, is a SMN2 splicing modifier approved for the treatment of spinal muscular atrophy. It is the first oral drug approved to treat this rare and often fatal genetic disease. Risdiplam’s molecular shape was first reported in 2013 (three years before its IND was submitted to the FDA), and there are currently less than 50 other reported substances that share this molecular shape. The scaffold of risdiplam consists of three ring systems linked together. The ring system highlighted in the image (4,7-diazaspiro[2.5]octane) is one that has not been used before in an approved drug. This novel ring is an example of a spirocyclic ring system, in which two rings are linked by a common atom. Specifically, it is a spiro-fusion of a piperazine ring and a three-membered ring. While this spirocyclic derivative of piperazine is novel to approved drugs, the piperazine ring itself is not; it has been used in a very large number of commercial drugs. Spirocyclic ring systems like this are of increasing interest in medicinal chemistry because of their ability to increase the non-planarity of molecular structures, thereby enhancing their three-dimensional aspect.

Retevmo (selpercatinib), originated by Array BioPharma, is a RET (rearranged during transfection) inhibitor indicated for the treatment of lung and thyroid cancers with RET gene mutations or fusions. It was the first FDA-approved drug to selectively target RET. Selpercatinib’s molecular shape was first reported in 2018 (one year after its IND was submitted to the FDA), and there are currently less than 350 other reported substances that share this molecular shape. The scaffold of selpercatinib consists of four ring systems linked together. The ring system highlighted in the image (3,6-diazabicyclo[3.1.1]heptane) has not been used before in an approved drug. This novel ring, like the ring highlighted in the drug Evrysdi (discussed above), is also a derivative of piperazine. This derivative was created by adding a one-carbon bridge to the piperazine ring. Recent work found that incorporating these types of rings into a drug structure can lower its lipophilicity, i.e., its affinity for a lipid-like environment. This is an important property affecting many aspects of drug activity. X-ray crystallography found that the two central rings of selpercatinib (including its novel bridged piperazine) were buried deeper in the ligand-binding cleft of the target protein compared to pralsetinib, the second RET inhibitor approved in 2020. This shows the important role rings can play in the binding of a drug to its target.

This chart shows that among these drugs there are three times as many Pioneers as non-pioneers.

Structurally novel drugs accounted for 9 of the 12 cyclic, small-molecule oncology drugs approved in 2020. As an example set of these Pioneer drugs, Figure 6 showcases six new oncology drugs that are Pioneers and also designated as breakthrough therapies by the FDA. A closer look at these drugs indicates that they represent a series of important “firsts” with regard to cancer treatment, further reinforcing the clinical impact of structural innovation.

Ayvakit is the first therapy approved to treat gastrointestinal stromal tumor that is caused by a specific mutation in a platelet-derived growth factor receptor.

Pemazyre is the first therapy approved to treat metastatic bile duct cancer (cholangiocarcinoma) in which the tumor has a mutation in a fibroblast growth factor receptor.

Qinlock is a medication to treat advanced gastrointestinal stromal tumor and is the first drug specifically approved as a treatment for patients who have received prior treatment with three or more kinase inhibitors.

Retevmo (as discussed above) is the first treatment for non-small cell lung cancer and some thyroid cancers in which tumors have an alteration (mutation or fusion) in the RET gene.

Tabrecta is the first treatment approved for metastatic non-small cell lung cancer in which tumors have a mutation leading to MET (mesenchymal-epithelial transition) exon 14 skipping.

Tukysa is a medication approved as part of a combination regimen for patients with inoperable, locally advanced, or metastatic HER2-positive breast cancer, including cancer that has spread to the brain.

As shown in our recent structure-based analysis of drug innovation, the proportion of Pioneers among FDA-approved drugs has been trending upward over the last couple of decades. Analysis of the 2020 drug approvals suggests that this structural innovation trend is likely to continue as drug hunters seek to improve existing medications, find medications for conditions that are currently untreatable, and stake unique intellectual property claims in high-value therapeutic areas. Furthermore, the emergence of new threats such as microbial resistance to established antibiotics or novel viral pathogens such as SARS-CoV-2, the coronavirus that causes COVID-19, continue to reinforce the urgency of developing new therapeutics to mitigate these threats. The question is, what can be done to accelerate discovery and to what extent will machine learning and emerging predictive approaches have an impact on this trend in the coming years?

Fuente: CAS, a division of the American Chemical Society