The effect of river nutrients on marine life 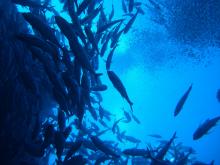 A recently published JRC article describes the strong link between the nutrients in European rivers and marine productivity (up to fish production) in the Mediterranean Sea from 1960 to 2012.

The article is the first ever to describe a strong and significant correlation between river nutrient loads and biological production holding over a substantial time period in the Mediterranean Sea. It also provides the first quantitative evidence of the close relationship between chemical conditions, marine productivity and fish abundance in the basin. It postulates that such abundance is due primarily to environmental factors such as nutrient concentration.

The authors conclude that the final impacts of discharges from rivers need to be considered in managing continental waters, as all such discharges have an impact on the total marine productivity of the Mediterranean Sea. They call for well-defined and sound river management scenarios that take into account their effect on the Mediterranean Sea characteristics.

The Mediterranean Sea, the largest semi-enclosed water body on Earth, is subject to immense pressure from fisheries, tourism, land use, and waste discharges that can impact ecosystem services. Its main sources of nutrients come from the rivers that feed into it. It is a moderately productive sea in terms of fisheries, with relatively abundant fish production; despite the fact that it represents only about 0.8% of the world’s marine area, the Mediterranean accounts for 2.2% of global marine fish catches.

JRC scientists investigated the effect of river nutrients on marine productivity (plankton to fish) in the Mediterranean Sea. They used a numerical 3D model to calculate the average annual values of primary production rate (PPR) and zooplankton biomass in the upper 120m of the Sea during the past 5 decades.


Then they compared these with the average catch per unit effort, CPUE (approximating fish abundance levels) for each year from 1960 to 2010. A strong positive and significant relationship emerged between the two sets of data.

Nitrate and phosphate limit biological production in this marine basin. An analysis of the nutrient loads of the main rivers that feed into the Mediterranean Sea revealed that nitrate loads increased continuously during the past decades, reaching a maximum at the beginning of the 21st century and declining slightly afterward. Phosphate was found to reach maximum levels during the early 1980s, and sharply declined thereafter, following the introduction of a regulation banning the use of phosphates in detergents in the 1980s. The peak occurrences of both nutrients were directly associated with low-frequency signals in the biological series (both from the model and from the CPUE), which seems to indicate that a strong control of marine productivity can be traced back to the nutrients discharged by rivers into the Mediterranean Sea.