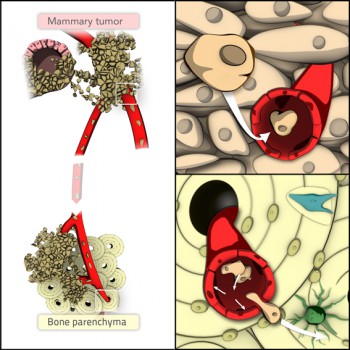 Physicians currently have no tools to help them detect breast cancer patients who will suffer metastasis, a process that occurs in 15-20% of cases. In particular, they are unable to identify those patients that may benefit from metastasis-specific treatments such as zoledronic acid.

A study led by Professor Robert E. Coleman, at the University of Sheffield, and the ICREA researcher Roger Gomis at the Institute for Research in Biomedicine (IRB Barcelona) and published today in Lancet Oncology has uncovered MAF amplification as an approach that allows the stratification of breast cancer patients that would benefit from the use of zoledronic acid in the adjuvant setting (MAF negative) from those that may be harmed (MAF positive and non postmenopausal).

The original discovery was patented and transferred to Inbiomotion, a spin off from the IRB Barcelona and ICREA, founded at the end of 2010. Inbiomotion, led by the venture investors Ysios Capital and Caixa Capital Risc, has developed the technology necessary to validate the marker in clinical trials.

Bone metastasis is the only type of metastasis that can be controlled, but not cured, by drugs. Treatment is only given once the metastasis has been identified, which is normally too late. Preliminary studies indicate that the same drugs used to treat metastasis could also be used to prevent it, and identifying those patients that would benefit from the treatment is therefore very important. “This is where the discovery made at IRB Barcelona and validated by the current study could be of great use to clinicians and would avoid unnecessary treatment of patients who would not benefit or could be harmed by the treatment," suggests Prof Gomis, group leader of the Growth Control and Cancer Metastasis.

About one million new cases of breast cancer are diagnosed each year. Preventive treatments can have unwanted side effects and come at a cost, making broad administration of the drugs an unviable option, even less so considering that 4% of patients are likely to be harmed by the treatment. "In order to implement a companion diagnostic, we first need to know which patients may benefit and which ones will not. Our discovery offers a way to distinguish what wasn't possible before," confirms Prof Gomis.

This study has focused on the association between treatment benefit, MAF amplification and outcome. In MAF-negative patients, the inclusion of zoledronic acid in the adjuvant setting was associated with improved outcomes irrespective of menopausal status. In contrast, in non-postmenopausal MAF-positive patients at the start of the treatment, increased adverse outcomes and mortality were observed. Assessment of MAF status has the potential to become an objective approach to select breast cancer patients for the inclusion of adjuvant bisphosphonate (i.e. zoledronic acid) treatment.

Dr. Joan Albanell, head of Medical Oncology at Hospital del Mar, affirms: "The present study provides novel evidence to support MAF as the first clinically actionable predicitive biomarker to select patients with early breast cancer for adjuvant zoledronic acid. If the results are confirmed in an independent ongoing study, MAF should be incorporated for routine testing in early breast cancer and would have an impact in the life of thousands of patients that would benefit from a personalized selection".

Confirming this finding in an independent trial is the next step. If confirmed, it could modify the standard of care of early stage breast cancer and improve the quality of life of these patients. “This is exactly what we are currently doing. Inbiomotion has now delivered the technology and has begun the second prospective /retrospective clinical trial to validate the marker in early stage breast cancer patients”, explains the Prof Gomis.

The study, published today in the open access Lancet Oncology, one of the most-read specialized oncology journals, is an ongoing technology transfer project at IRB Barcelona. The discovery has led to the creation of the company Inbiomotion, founded by Gomis and in which ICREA also participates. The spin off received funding in 2012 and 2016 from the venture capital companies Ysios Capital, Caixa Capital Risc and the Vila Casas Foundation to develop the tools necessary for the clinical trials.

The research was conducted in collaboration with several clinical centers based throughout Europe including Hospital del Mar with Dr. Joan Albanell, the Fundación Jiménez Díaz with Dr. Federico Rojo, the IRB Barcelona with Dr. Roger Gomis, as well as Sheffield Cancer Research Center with Prof. Robert Coleman, a world expert in bone metastasis, and Inbiomotion with Dr. Juan Carlos Tercero and Dr. Joël Jean-Mairet.

Dr Roger Gomis’ laboratory is supported by the BBVA Foundation, the Spanish Ministry of Economy and Competitiveness and the Government of Catalonia.

Created in 2005 by the Generalitat de Catalunya (Government of Catalonia) and University of Barcelona, IRB Barcelona is a Severo Ochoa Centre of Excellence, a seal that was awarded in 2011. The institute is devoted to conducting research of excellence in biomedicine and to transferring results to clinical practice, thus improving people’s quality of life, while simultaneously promoting the training of outstanding researchers, technology transfer, and public communication of science. Its 25 laboratories and seven core facilities address basic questions in biology and are orientated to diseases such as cancer, metastasis, Alzheimer’s, diabetes, and rare conditions. IRB Barcelona is an international centre that hosts 400 employees and 32 nationalities. It is located in the Barcelona Science Park. IRB Barcelona forms part of the Barcelona Institute of Science and Technology (BIST) and the “Xarxa de Centres de Recerca de Catalunya” (CERCA). 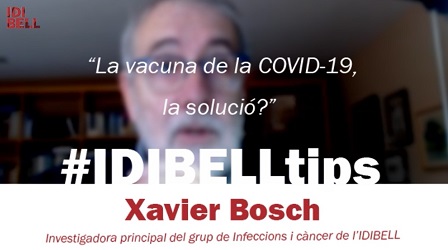 Xavier Bosch: 'If a person has doubts ab...

​A single virus has been able to spread all around the world in a fe...