Built on over 20 years’ research led by Laura Soucek, co-Director of the Vall d’Hebron Institute of Oncology’s (VHIO) Preclinical and Translational Research Program, and Principal Investigator of VHIO’s Models of Cancer Therapies Group, Omomyc (OMO-103) is a therapeutic mini-protein developed in-house by the VHIO and Catalan Institute of Research and Advanced Studies’ (ICREA) spin-off company Peptomyc SL, which was co-founded by Laura Soucek in 2014.

Having previously shown the preclinical efficacy and safety of this novel cell-penetrating mini-protein in mouse models, Laura Soucek’s team successfully developed anti-MYC peptides for the treatment of several tumor types, the first of which, OMO-103, now shows promise in becoming the first ever clinically viable and direct inhibitor of MYC – a protein implicated in driving and maintaining cancer

Elena Garralda, Director of VHIO’s Research Unit for Molecular Therapy of Cancer (UITM) – CaixaResearch, enrolled 22 patients to a phase I clinical trial in April 2021 to determine the safety, tolerability, pharmacokinetics and pharmacodynamics, and proof-of-concept of OMO-103. These heavily pre-treated patients had a range of solid tumors including pancreatic, bowel, and non-small cell lung cancers, and had received at least three prior lines of therapy. Results of the CT scans of the 17 evaluable patients showed that 8 had stable disease, with the treatment having halted tumor growth.

“While it is still very early days to assess the activity of Omomyc, we are observing stabilization of disease in some patients. Notably, one patient with pancreatic cancer remained on the study for more than six months and his tumor shrank by eight per cent with an eighty-three per cent decrease in the quantity of circulating tumour DNA in the bloodstream,” said Elena Garralda, Principal Investigator of VHIO’s Early Clinical Drug Development Group and first author of this present study that was carried out in collaboration with two other Spanish sites.

“Another patient with a salivary gland tumor, whose disease remains stable, is still on the study after 15 months, and a patient with sarcoma, who responded very poorly to other treatments previously, had stable disease for 8 months,” added Garralda, who will present preliminary data from this study during a Plenary Session* at ENA 2022, that she will co-chair alongside Scientific Committee co-chair for the meeting, Ruth Plummer, Northern Centre for Cancer Care, Newcastle upon Tyne, UK.

The most common treatment-related adverse events included mild reactions to intravenous infusion, such as chills, fever, nausea, rash, and low blood pressure. Higher dose levels were associated with more reactions to the infusion but were easily treated.

“The biomarkers clearly show that we are successfully blocking MYC to treat cancer. In addition, the adverse side effects are mostly mild, which is important as we seek to assess the efficacy of OMO-103 in combination with chemotherapy or other therapies,” continued Elena Garralda, a member of the scientific committee of the meeting.

Another important aspect of the study focused on evaluating the pharmacokinetics of OMO-103 and establishing how the drug was absorbed and processed in the body, and how long it remained in the tumor. This analysis indicated that OMO-103 remained for at least 50 hours in blood, and possibly even longer in tumors.

“For many years this cancer-causing protein has been thought to be undruggable. OMO-103 is the first MYC inhibitor to successfully complete a phase I clinical trial and is ready to move to a phase II study over the coming weeks. This is a remarkable achievement considering that MYC is one of the most sought-after drug targets in cancer,” added Laura Soucek, an ICREA Research Professor, co-founder and Chief Executive Director of Peptomyc SL.

She concluded, “Based on these preliminary data, we have reason to be optimistic that Omomyc-based therapy will continue to step up in more effectively treating several different tumor types and ultimately improve patient outcomes.”

This study was funded by Peptomyc SL and by funding from the SME Instrument phase II within the EU’s Horizon 2020 programme.

The preclinical research on Omomyc, essential for understanding the mechanism of action of this molecule, was partially financed by the BBVA Foundation in the context of the CAIMI institutional program (Comprehensive Program of Cancer Immunotherapy & Immunology). Through this funding, Dra. Laura Soucek’s group was able to study, in humanized cancer models, the changes in the antitumor immune response upon Myc inhibition by Omomyc. We would like to thank Cellex for providing the necessary scientific infrastructure for the development of preclinical research associated with the clinical study. 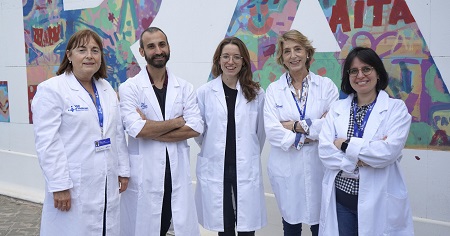 The research has also allowed to describe new findings regarding the i...