The protein RepC only acts on negatively supercoiled plasmids (circular DNA molecules present in bacteria), this means, twisted in counter to the normal winding direction of the double helix. This is the conclusion of a recently published study by researchers at the Centro Nacional de Biotecnología of the CSIC (CNB-CSIC). The work sheds light on the mechanism of replication of these circular DNA molecules that, among other things, allow certain bacteria become resistant to antibiotics.

In bacteria, not all the genetic information is contained in the chromosomes. Plasmids are small circular DNA molecules that replicate independently and that contain, for example, genes that confer antibiotic resistance to pathogenic bacteria.

A team of scientists from the Centro Nacional de Biotecnología of the CSIC (CNB-CSIC) has revealed that these molecules must be negatively supercoiled (towards the left, in the opposite direction to the usual winding of the double helix) so that the replication machinery can start working.

Specifically they studied the activity of RepC, a protein responsible for cutting the DNA chain in order to start the copying process. "It was already known that, to begin the replication process, the plasmid must acquire a fork-shaped structure at the binfing point for RepC. However the role of the protein in the formation of this cruciform structure was not known until now", says CNB-CSIC researcher Fernando Moreno.

This study, published in the journal Nucleic Acids Research presents a passive model of RepC activity, in which the protein only nicks the DNA when suitably twisted and when the cruciform structure is already present.

"Until now it was suspected that RepC actively induced the formation of this structure in the DNA –explains Moreno, lead author of this work–. Our work reveals that it is not correct. RepC only binds plasmids with a specific degree of supercoiling and the cross-shaped structure already present in the origin of replication. This ensures that only properly twisted plasmids can be replicated".

For this work, researchers have used magnetic tweezers, a leading technique that allows them to work with individual DNA molecules. "It is the first time that magnetic tweezers are used to evaluate RepC activity. Thanks to them we have been able to observe the changes occurring in the structure of DNA in the millisecond time scale", says Moreno.

Image: Passive model proposed for RepC activity. The plasmid, negatively supercoiled has a cruciform structure to which the protein binds and where the nick for starting replication occurs. Fernando Moreno, CNB-CSIC. Nucleic Acids Research doi: 10.1093/nar/gkw689 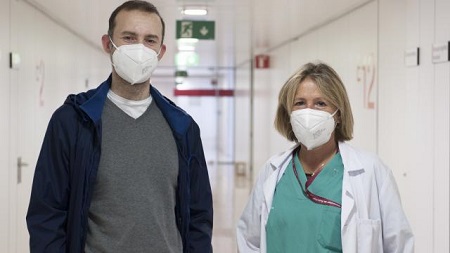 A study by the International Center for Numerical Methods in Engineeri...