The comprehensive mutation map, which is the first of its kind, has the potential to help clinical geneticists predict whether the mutations found in amyloid beta can make an individual more prone to developing Alzheimer’s disease later in life. Also, it will also help researchers better understand the biological mechanisms that control the onset of the disease.
“The genetic sequencing of individuals is increasingly common. As a result, we are finding more and more mutations, yet we lack the criteria to predict their outcome. Are they pathogenic and require intervention? Or are they neutral or benign?” says Benedetta Bolognesi, one of the lead authors of the study and Junior Group Leader at Institute for Bioengineering of Catalonia, IBEC. “Specialists can use this map proactively to interpret the effect of a mutation so that when it is found in an individual we already know what it means and hopefully what to do. Similar maps have been built for the BRCA1 gene and breast cancer in the past and it is exciting we can replicate this for Alzheimer’s disease.”

According to Ben Lehner, ICREA Research Professor at the Centre for Genomic Regulation (CRG) and co-author of the study, “This is the first large-scale analysis and first comprehensive map of how mutations promote and prevent a protein to form amyloid fibrils, giving us unprecedented insight into this mechanism, which also represents the main therapeutic target in Alzheimer’s disease”. 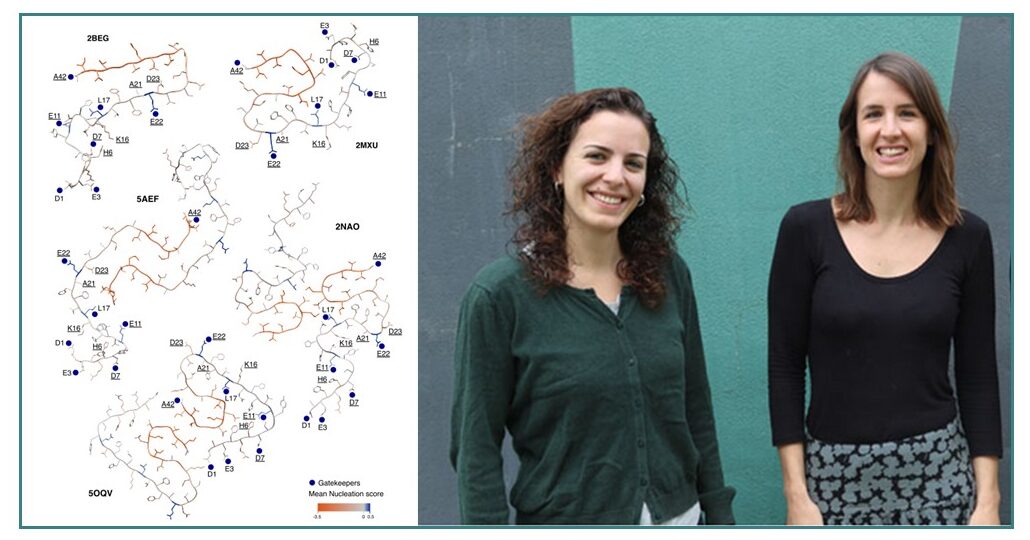 Image: On the left, the average effects of mutations in amyloid beta visualised on cross-sections of amyloid fibril variants. Orange: mutations at this position on average decrease amyloid aggregation. Blue: mutations at this position on average increase amyloid aggregation. On the middle and right, the first and last authors of the work respectively, Mireia Seuma and Benedetta Bolognesi, both from IBEC.

Mutations are a key factor in the onset of disease

Alzheimer’s disease is the most common form of dementia, a neurodegenerative disease that affects more than 50 million people around the world. Many clinical trials have been performed worldwide but there is no known prevention or cure for the disease. The biological processes underlying Alzheimer’s disease are associated with the deposition of protein clumps, also known as plaques or amyloid fibrils, in the brain. These plaques are mainly composed of the amyloid beta peptide (Aß) and their generation is toxic to neurons. In normal conditions amyloid beta peptides are soluble, but in the context of the disease they attach to one another, aggregating and forming long insoluble fibril clumps, in a process that once started is self-perpetuating.

Previous studies have shown that some inherited and particularly aggressive rare forms of Alzheimer’s disease are caused by mutations in the gene encoding the amyloid beta peptide. Now researchers at the IBEC and CRG present the first comprehensive map of how mutations affect the formation of amyloid beta peptide plaques and influence the onset of Alzheimer’s disease.

The researchers quantified all possible mutations in the amyloid beta peptide and how this influenced the formation of aggregates by using a cell-based high throughput system where the growth of cells depends on the aggregation of the different versions of Aß inside them. This allowed them to test the effects of more than 14,000 different versions of Aß in a single experiment.

This revealed that Aß42, the most abundant form of Aß peptide, has a modular organization; the aggregation rate can increase with mutations in the beginning of the peptide while it decreases when mutations occur in the final and hydrophobic region of the peptide. Researchers also found that the electric charge of the peptide plays an important role in preventing aggregation.

A robust approach that can be used for other diseases

The researchers also looked at all fourteen known mutations in the Aß peptide that cause familial Alzheimer’s disease, an inherited form of the disease. All fourteen of these mutations were found to increase the aggregation of the Aß peptide. According to the authors, this is a very important finding that suggests that the biochemical mechanism observed in this work is very similar, and maybe the same, as the one that causes the human disease.

“These mutations are extremely rare and underlie a relatively small number of cases of Alzheimer’s disease. However, they will exist in someone who is currently alive on the planet and so we need to be able to predict the harmful ones that will cause Alzheimer’s in some people. This can help us identify early in life the people that are likely to develop the disease so they can take action to prevent this, when this is possible” concludes Benedetta Bolognesi.

These fourteen known mutations are less than 4% of all the mutations that can occur in Aß. This new work measures the effects of all of the >350 additional mutations in Aß , identifying those that accelerate the formation of aggregates and so the mutations that are most likely to cause Alzheimer’s disease.

We are now looking forward to building maps for other proteins that cause different neurodegenerative diseases like Parkinson’s disease and to seeing the data from our atlas being used in the clinic. Mireia Seuma, first author or the work and researcher at IBEC.

This project is a pilot study for a major international collaboration called the Atlas of Variant Effects (https://www.varianteffect.org/) that aims to characterise the effects of every possible mutation in the human genome and to identify and understand all the mutations that cause thousands of different diseases.

The Cilastatin project arose thanks to the research carried out by the...